Let’s make a little detour into the lore of Piney’s world, and meet his first enemies!

Piney is a little cute pineapple who struggles to fit in society due to his psychopathic behavior. Always alone since his birth, his only joy is bloodshed, which nobody seems to understand, for some reason… Poor little one… But we promise, he is trying his best!

One day, Piney decided to attack a research complex… Just for fun. As the saying goes, kids will be kids! That day, he murdered every cute scientist fruit on shift (they should have stayed home, if you ask me) in a glorious delight. However, as Piney was trying to kill another scientist fruit, the latter pushed a mysterious red button in an act of despair. What Piney didn’t know was that it was the button to activate a portal to an alternate dimension.

As soon the portal was open, monstrous demonic fruits started to emerge.

Now Piney is tired, he wants to go home, but he lost its way to the exit. Well, too bad! Guess he’ll just have to slay every being it encounters until he finds a way out. Ferocious demonic fruits? Pff, if there is a monster here, it’s Piney. And don’t worry, he looooves hunting his prey…

N.B.: yes, this is shamelessly inspired by Doom.

The game starts with Piney murdering some random innocent fruit scientists while they’re working. This level is a tutorial for the player to learn how to control little Piney and no fruit will defend itself. A pure bloodbath.

After a cutscene showing the demonic portal, the player is left right after the first demon fruits appeared. Piney must find the exit, and for that, he will pass through different rooms with various enemies that he will be more than happy to get rid of.

We wanted a really basic first enemy, no bigger than 16x16 pixels. I struggled a little to find a fruit that is recognizable enough and that I could modify so that it looks like it was coming from hell. Also, I wanted to try to copy the Binding of Issac’s enemy art style. And so, I came up with Jaw Pear:

The first one is little Piney with his sweet Kindness (the chainsaw). This concept will help me design the title screen. 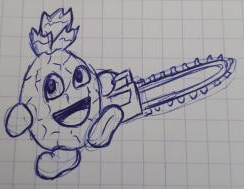 And the second one, which I would like to see as a boss someday: Rayseye or Reyesin. I like the second one most because of the double pun: raisin + eye and -sin (for a demonic fruit, I find it funny). 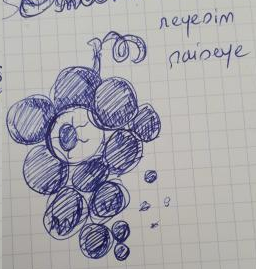